The important question is: How did this happen?

The answer, simply, is that rather than running their usual motion offense, the Spurs decided to try their hands at running a bakery. The problem is that the only pastries they knew how to cook were turnovers (mostly apple ones). All (bad) jokes aside, the Spurs continually hemorrhaged possessions last night, giving the ball to the Warriors in a variety of ways.

Naturally, the multitudinous turnovers were a problem for San Antonio, but the fact that it’s bad to turn the ball over isn’t enough to explain the blowout. After all, it’s not like Golden State took particularly good care of the ball; it had twenty-one turnovers to San Antonio’s twenty-six (which is eighth-most out of 1348 team games played so far this season!).

In fact, just turning the ball over alone doesn’t matter all that much. Take a look at a graph: 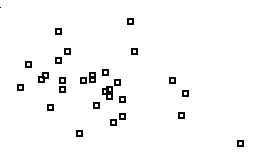 If turnovers don’t inherently affect winning, then why did they hurt the Spurs so significantly against the Warriors?

When a team turns the ball over, that often leads directly to a fast break, a facet of the game in which the Warriors excel. In fact, Golden State leads the league in fast break points with 20.7 per game, an impressive 2.76 standard deviations above the mean. To illustrate that number, take a look at a scatter plot of NBA teams and how many fast break points they have per game: 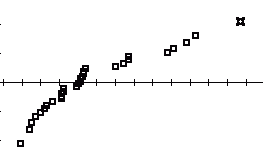 Look how far the Warriors (the star in the upper right corner) are away from everyone else. In fact, they gap between them and sixth place is larger than the gap between sixth place and thirtieth!

Golden State is so aberrant in this regard, that, as shown by the following box plot, it qualifies as an outlier:

As we can tell, Golden State’s offense relies a lot on fast breaks, and we’ve already covered how turnovers often lead to fast breaks. Now let’s take a look at San Antonio’s defense.

The Spurs allow 11.2 fast break points per game, ranking sixth in that category.  As seems to be customary between these teams, two strengths are in direct conflict.

In this case, the Warriors’ strength won out. They scored nineteen fast break points, about two points under their average, but roughly eight points more than the Spurs’ average.

Now, one important aspect of a fast-break is the “fast” part. The Warriors rank first in the NBA in pace, while the Spurs are the eighth slowest team in the league. Since Golden State was able to take control of the pace of the game, San Antonio was out of its element. It didn’t help matters that the Spurs’ average age is 30.5, the oldest in the league by over a year. In fact, that’s likely a significant part of why they play so slowly.

Anyways, to sum it up, the main reason the Warriors were able to dismantle the Spurs on Monday night was because they were able to take control of the pace of the game through forcing turnovers. Those turnovers allowed them to score plenty of fast break points, erasing one of San Antonio’s biggest strengths.

Here’s a bonus question: Did this game provide a blueprint for how to beat the Spurs?

I’ll put it simply: Do many teams have a guy who can do things in transition like this?

Yeah, I didn’t think so.

And aside from the otherworldly talents of Curry, the Warriors, as we’ve discussed, have a lot more going for them that other teams simply don’t have.

But even the Warriors haven’t figured out the formula to beating the Spurs.  San Antonio had nearly double its usual turnovers and Tim Duncan was sitting out. There were plenty of other factors that contributed to the blowout that are unlikely to recur all at once.

Although this clearly is not a death knell for the Spurs, it could be a chink in their formerly unbroken armor, and perhaps particularly skilled teams will now be able to exploit it.